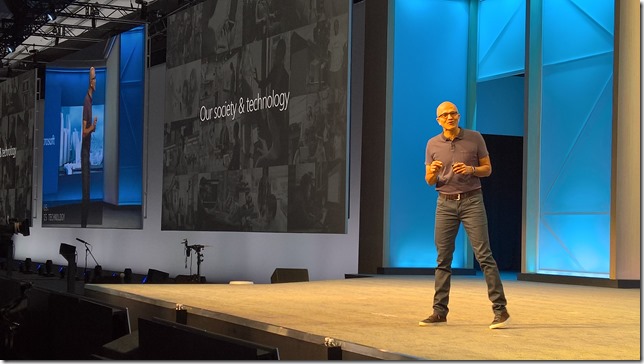 Microsoft CEO Satya Nadella started his keynote asking many questions – such as whether technology helps our hinders our values, whether technology is helping or hindering privacy. And he answered those questions positively highlighting Microsofts mission to “Empower every person and every organisation on the planet to achieve more”.

“We live in a mobile first and cloud first world” states Satya – it’s about the mobility of people across all their devices. Cloud is a new form of computing that enables this mobility.”

Nadella highlighted numbers – such as Microsoft Azure Active Directory being used by over 5-million businesses and Windows 10 now being installed on over 270-million users.

Terry Myerson showed off numerous improvements in ‘inking’ (drawing and writing on a tablet with a stylus) that are coming with the upcoming ‘Anniversary Update’ coming to Windows 10 as a free update in Winter (Summer in the US). Demonstrations should improved inking in Word, PowerPoint, Adobe Illustrator.

Other areas that have so far attracted attention: